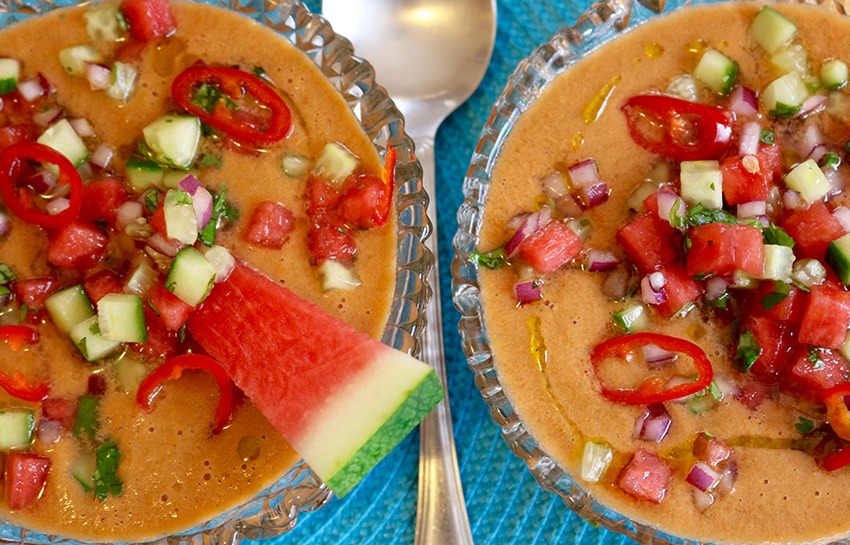 I always thought Gazpacho was a Spanish thing, but….

With soldiers turning rations of bread, garlic & vinegar into a cold soup!

That evolved it into the version we are familiar with today.

Creating a more flavoursome soup than the poor Roman soldiers were used to!

As the soup spread across Spain & Portugal…

Tomato became the base of the soup after Christopher Columbus brought the fruit back to the continent!

And nowadays watermelon, cantaloupe, cucumber & all sorts of herbs, fruits & veggies are added…

As people all over the world enjoy their version of Gazpacho.

We’re sure you’ll enjoy ours!

Or as they say in Spanish

Place all ingredients for the soup, except the olive oil, into a blender and blitz until combined.

Slowly add in the olive oil and blend until smooth.

Place in the fridge to chill for 3-4 hours.

In a bowl, add all the garnish ingredients, except for the chilli, season with salt & pepper and mix well to combine.

Divide the soup into bowls, garnish with the garnish mixture, add the red chilli, drizzle with some olive oil & serve!!

Note: If you can get your hands on some, you could use jalapeno’s in place of the long red chilli.