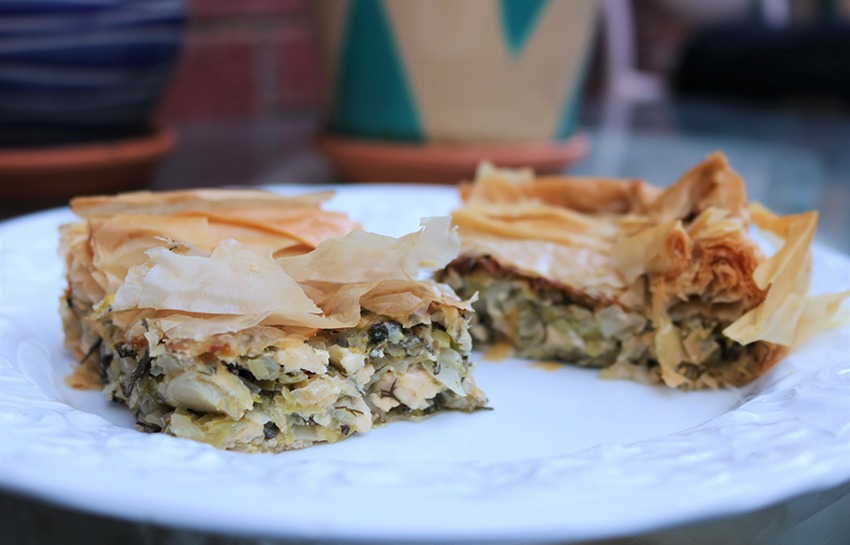 Imagine for a moment…

A life without carbs!

And when I say carbs,

I don’t mean those found in fruits and veg…

I mean the comfort carbs,

I’m sure you’ve had a go yourself!

If not ZERO carbs,

There’s been some sort of embargo…

For at least some part of the day,

Maybe even full days and weeks on end,

Where you’ve gone Keto, Atkins, Paleo or some other low carb variation.

Now don’t get me wrong,

I’m all for healthy eating…

But how could I resist…

The locked in goodness of homemade feta and leek pie,

The leek sautéed with aromatics like dill, mint, spring onion,

And baked so the filling is encrusted in flaky, crispy and buttery filo,

Served simply with a dollop of Greek yoghurt on the side,

Just to balance out some of the sweetness and richness of this very warming,

Not so low carb,

A glass of red would have paired up brilliantly,

But there was no time as I gobbled down my second piece.

Side salad would work too,

But patience isn’t one of my better virtues.

Not much more to say here other than…

In a large pan on medium high heat, heat the 3 tbsp of olive oil. Add the brown onion and saute until it is translucent. Add the leek and cook, stirring.

About 5 minutes in, when the leeks are starting to break down, add the spring onion. Season with a good amount of pepper and a little salt and keep cooking for a further 5-10 minutes, or until the leek is nice and tender.

Remove from the heat and put into a large bowl.

Spread one sheet of filo on the oven dish vertically, some will hang over the sides, and with the brush drizzle with olive oil (don’t brush the olive oil on with the brush, drizzle so there are droplets of oil).

Spread two sheets of filo horizontally and drizzle with olive oil again. Continue this one vertical, two horizontal until you have five layers (total 7 sheets), drizzling olive oil on every layer.

Add the filling to the dish and spread out evenly inside.

Spread one sheet of filo, as you did on the bottom, and drizzle with olive oil. Do the vertical, horizontal layering as you did with the bottom sheets on the top until there are 4 layers (6 filo sheets), drizzling with the olive oil between every layer.

Turn in the overhanging filo inward and scrunch under to make a border. Drizzle the remainder of the olive oil over the edges and the top layer. Use most of it on the edges so that the crust comes out nice and crunchy.

Score into 12 pieces with a knife then put in the oven to bake about 1 ½ hours or until the crust is nice and golden brown.

Serve with a dollop of Greek yogurt.