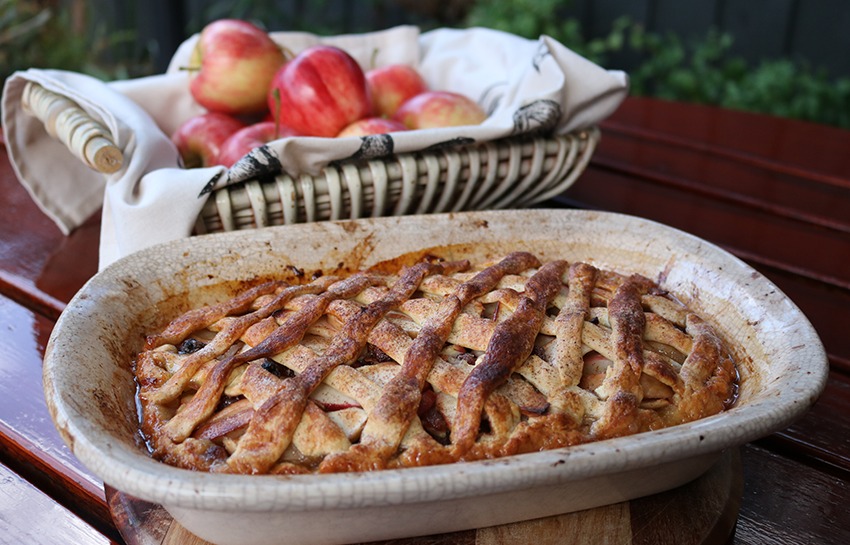 Sarah Lee was her name…

That’s where my love affair with apple pie began!

Oh how naïve I was as a young boy…

Falling in love with the first pie I ate!

It wasn’t until I was a teenager,

That my taste in pies matured.

This time it was mum’s country style,

There’s no forgetting the first time…

I smelt the real deal baking in the oven!

The forbidden apple too hard to resist.

When the wait was finally over…

And I got to sample her in my mouth…

The butteriness of the short crust…

The sweetness of the apple & sultana…

And the gorgeous aroma of the cinnamon…

Left me in apple pie heaven!

Love struck for the second time…

This time I remained in love!

And I trust you will embrace her too!

Ingredients for the Crust

Method for the Crust

In a large bowl combine the flour and sugar.

Chop up the butter and add it to the flour. With your hands combine the ingredients until the texture is like breadcrumbs.

Beat the egg and water together and add it to the flour mixture. Knead the dough, adding about 4 flat tbsp of flour to the mix or until the dough no longer sticks to your hands.

Separate the dough into two portions, one slightly larger then the other.

Grease an oven dish (around 22cm) with butter. Add the larger ball of dough and with your hands cover the bottom of the dish with the dough, going half way up the side of the dish.

Cover the dish with glad wrap, as well as the extra ball of dough and put it in the fridge while you prepare the filling.

Method for the Filling

Chop the apples into very thin slices and place in a large bowl.

Add the lemon juice and using your hands mix them together until the apples are all coated.

Remove the apples from the excess lemon juice and place in another bowl.

Take the oven dish out of the fridge. Pour the apple mixture into the dish.

With the remaining dough, roll pieces into strips and arrange them over the top of the pie in a criss-cross pattern.

Egg-wash the top and sprinkle with sugar and cinnamon.

Bake in the oven for 1 hour.

Serve as is or with cream or vanilla ice-cream.