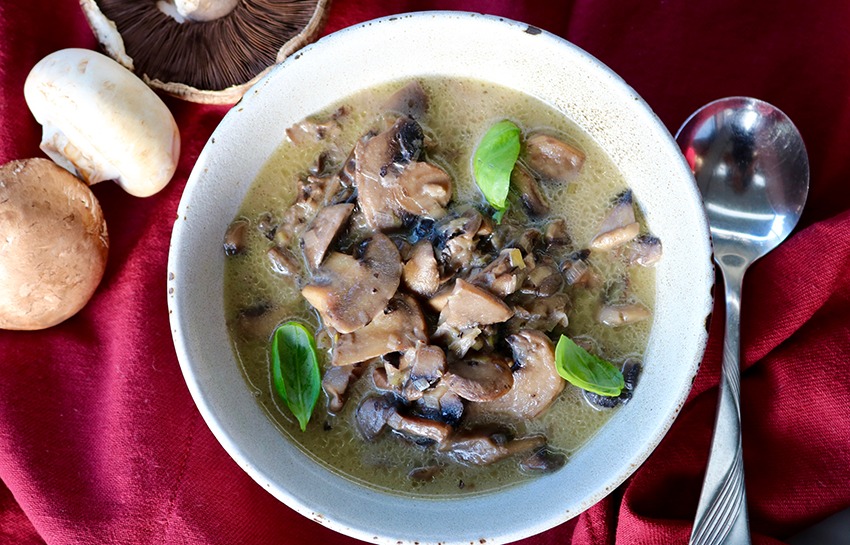 What’s the perfect meal for the start of a Melbourne Summer?

Is it a refreshing green salad???

Maybe some prawns on the barbie?

But because this Melbourne summer feels more like a London Spring…

Than a Melbourne summer…

We decided soup would feature on this week’s menu!

With Joe’s pick of the week being mushrooms…

I got to work with on my not so summery mushroom soup.

Sticking with the wintery theme,

I started off with finely sliced leek,

Giving this soup a lovely sweetness…

And a more delicate and mild finish, compared to using regular onion.

I just think it’s a little nicer in a soup to go for leek!

I then added my sliced mushrooms,

Which allowed the flavour and colour of the mushrooms to develop,

Before I added any liquid.

The main thing I want you to avoid at this point is the leek and garlic browning,

As it will taste burnt in the soup.

Turn down the heat if you’re worried about that…

And take a little longer to get your mushrooms browned.

Keeping to a meat free them…

I added vegetable stock as the base liquid of my soup.

Chicken stock or beef stock would be fine…

As of course would a mushroom stock…

But I’ve opted for veggie as I’m off meat for a couple of more weeks.

As stock is naturally high in sodium,

So in the early stages of frying off your mushrooms,

Go real light on salt until the stock has been added,

And then you’ll know exactly what you’re dealing with.

Lots of pepper throughout is a must however…

As this will give balance,

To the sweet elements like leek and coconut milk.

This will give the dish a gorgeous creamy and silky finish…

Without leaving you feeling heavy and bloated!

I go around 10 minutes of simmer for this last stage,

Which ensures you’ve got plenty of liquid left in your soup.

This is a really hearty, warming and earthy dish,

Full of lovely fibre, vitamins and protein from the mushrooms.

I served mine topped with chopped fresh chilli and basil.

And even parsley would be good if that’s what you had.

And the chilli not only gives the dish punch,

It also takes the edge off the sweetness of the leek & coconut milk.

I didn’t mention that I used Worcestershire sauce in the early stages when I was frying off my mushrooms and leek.

It gives a really punchy flavour note and elevates the mushrooms,

As well as giving some saltiness to the dish aside from the salt you add.

You could substitute soya sauce if you wanted to make the dish vegan,

As many Worcestershire sauces contain anchovy…

Or you could find a vegan option!

The recipe makes around 3-4 serves,

Depending on how hungry you are.

We served it with crunchy bread…

Drizzled with some olive oil…

And a little salad.

I ate it for dinner and lunch the next day…

And it was great on both occasions,

So you could always up the recipe if you wanted to have more for leftovers.

It may be a cold start to summer…

But I am very grateful to the weather gods,

As I really enjoyed this dish.

It was one of my favourites of the year…

And there is every chance I’ll give it another go before the years’ out!

All that’s left to say now, is…

In a large deep pan, heat the olive oil and sauté the leeks.

Add the garlic and when you start to smell the garlic, add the mushrooms. Cook stirring for 10-15 minutes.

Add the Worcestershire sauce and keep sautéing for another minute. Lightly season with salt and pepper.

Add the stock and bring it to the boil, then simmer covered for 10 minutes.

Add the coconut milk and stir to combine. Bring it to the boil again and then simmer covered for 10 more minutes.

Remove from heat and serve garnished with basil and some crusty bread.