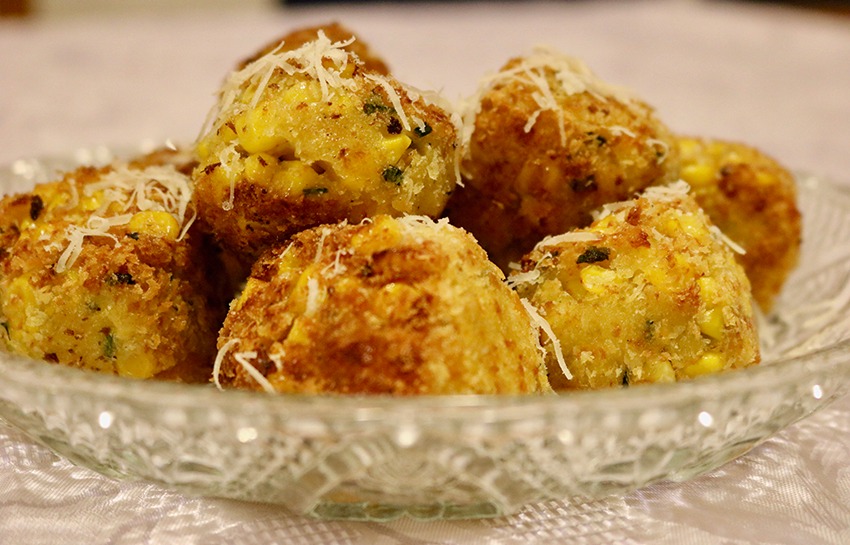 Try this out for a theory…

All food tastes better when you fry it up in a ball!

I can’t be certain,

Because clearly I haven’t put my theory to the test…

But let’s think about it for a minute.

Excellent as is, in a salad or even in a pizza.

Let’s make it into a ball,

Roll it in egg wash,

Dip it in crumb,

It’s crunchy on the outside,

Gooey on the inside,

And I’m not sure of the science,

But the molecular changes that take place,

As that cheese ball gets fried up,

Or deep fried for those that are even more ambitious,

Cannot be denied as stunning…

I thought let’s put my theory to the test.

We paired the sweet corn kernels,

Some herbs for freshness,

Chives in this case,

And some egg and semolina to bind!.

Rolled in some panko for extra crunch…

And shallow fried because we don’t own a deep fryer!

My eldest son who is against any change in his life,

And my dad who loves everything fried,

Were battling with me to get their hands on each corn croquette,

As they each came off the piping hot pan.

They need a lovely chutney,

But our impromptu siracha and mayo worked well too,

I’m gonna blend half the corn before I mix it with the other stuff,

Mainly to help it bind better,

And so I can use less crumb.

That everything tastes better as a fried ball.

Remove the leaves from the corn ears and in a large pot, boil the corn until the kernels are tender.

Drain and set aside to cool a little. Once cooled, with a knife cut the kernels from the cob and put them into a large bowl.

Shred the fresh mozzarella with your hands into small pieces and add it to the corn, then add the parmesan and chives. Mix to combine the ingredients evenly.

In a small bowl whisk the eggs and then add them along with the breadcrumbs and semolina to the corn. Season with salt and pepper to taste.

Using your hands mix everything together evenly and until the mixture firms and everything starts to hold together.

Using an ice-cream scoop, scoop out some of the mixture and roll it into a ball.

Roll the ball into the panko crumbs and put them on a tray. Continue this until all the mixture is gone. It should make 14-18 balls.

Heat the oil, about 2-3 cms to shallow fry, in a medium pan on medium heat.

Fry the balls, turning them to brown all over. Some corn kernels will fall astray, be sure to remove them from the fry pan because they will pop. Reduce the heat is the balls are burning, they should be nicely browned all over and cooked thorough.

Serve with any sauce of your choice and pair with a red & green cabbage salad!!