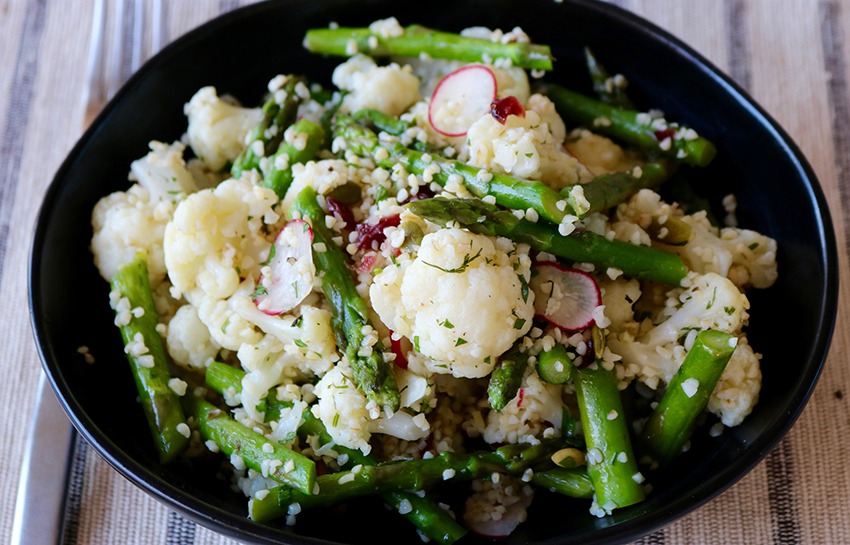 Love him or hate him…

You must admit that Jamie Oliver is an inspiration to so many of us home cooks!

And that’s why I admit that today’s recipe…

Is inspired by Jamie and in particular his Farro, Asaparagus & Cauliflower salad.

Before we start comparing…

I’m just gonna put it out there and say that our version is better!

I reckon that both on the eye & on the palette, ours has the edge on Jamie’s and here’s why…

We’ve gone for cranberries instead of sultanas…

Clearly easier of the eye and for me they work brilliantly on the palette too!

They’re lovely and have their place…

A much toastier and full flavour which this salad needs.

How sexy does our radish look compared to Jamie’s chard?

And the texture of our radish means each mouthful of our salad is a little more exciting than chomping on Jamie’s chard!

Jamie is a legend and he’ll keep inspiring me and many others for many years to come.

P.S. Here’s the link to Jamie’s recipe in case you wanted to compare for yourself!

Prepare bulgur as per packet instructions & set aside.

Cut the cauliflower into florets and boil in a pot of salted water until just softened. Strain and set aside to cool.

Heat a medium pan. Add the asparagus and drizzle with some olive oil. Pan fry until asparagus just softens. Remove from heat and set aside. Once cooled, cut spears diagonally in two.

In a jar combine the olive oil, vinegar, parsley, dill & season with sea salt and cracked pepper. Give the jar a shake to combine the ingredients.

Pour dressing over the mixed ingredients and combine well so that all the mixture is evenly covered.