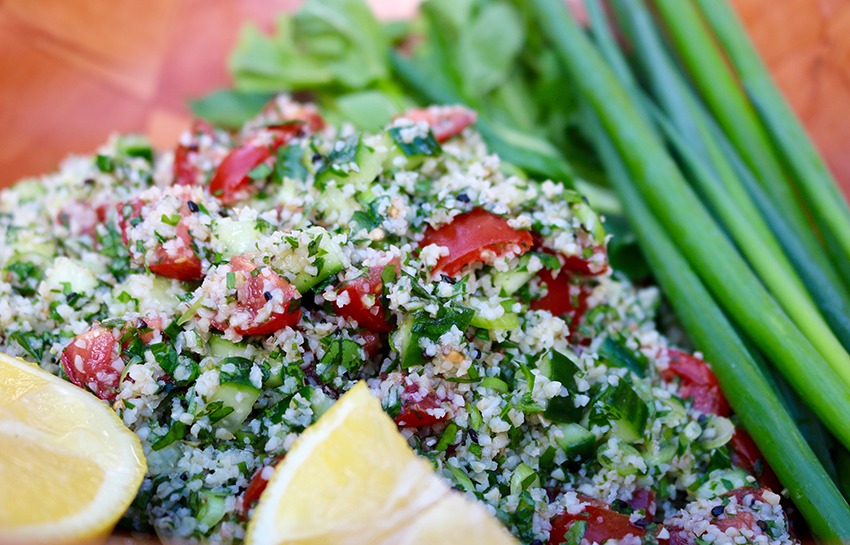 Paris of the Middle East,

Is the name often given to Beirut,

The modern-day capital of Lebanon.

A Mediterranean city where tradition and modernity fuse,

Creating a playground for locals and tourists alike!

The city of Geelong,

Is about as far away from Lebanon as you can get…

But it’s in Geelong,

Where some of Victoria’s…

I thought what better way to use Joe’s pick of the week,

Than by paying homage to Lebanon’s national dish,

The Lebanese would combine cracked wheat (or bulgur),

And top off with a good dose of Mediterranean favourites,

There’s no mention of cucumbers in the classic take…

But that hasn’t stopped us from adding them in our version,

Giving some fabulous crunch to our Tabouleh!

For even more crunch,

We decided to throw in a some black sesame seeds,

Which also gives the salad a great pop of colour…

And if I had them,

I likely would have added some chopped almonds,

Not that the salad isn’t great without them.

In many a Middle Eastern household,

Tabbouleh is served up as a salad with grilled meats…

Or as one of many share plates in a traditional feast.

We love it as a salad,

We love it as a side…

And we also love Tabbouleh as lunch the next day!

You can add it to your BBQs, dinner parties, lunches and picnics…

It’s healthy as can be.

With summer upon us,

It’s the perfect time for Tabbouleh to be on your menu too!

All that’s left to say is

Which I belive is Arabic for…
Buon Appetito!

In a jar add the lemon juice, olive oil and some salt and pepper to taste. Give it a shake and then pour over the salad.

Toss well to combine the flavours. Taste and season with more salt and pepper if required.