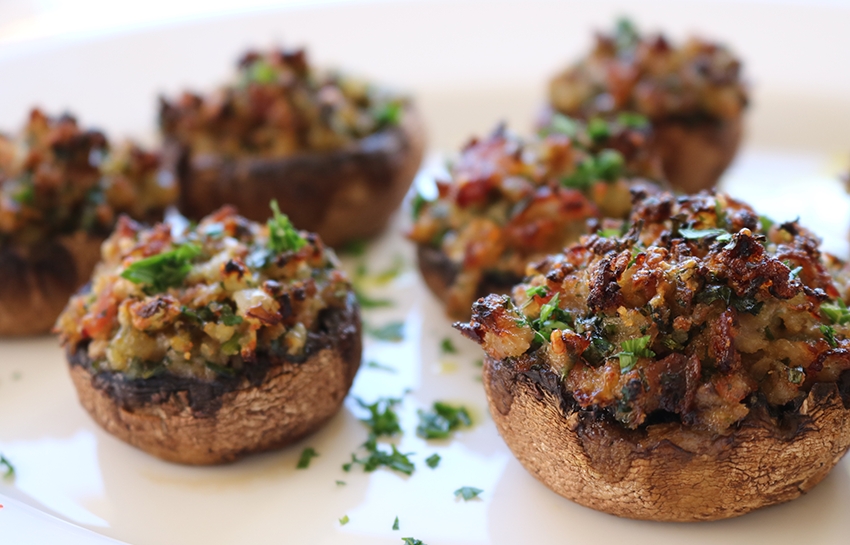 “Pancetta & Parmesan” sounds so much more sophisticated than “Pizza & Pasta”…

And this week’s recipe of the week is exactly that…

Joe’s pick of the week was assorted Victorian mushrooms, so…

Rather than making a pasta dish or a tart, we went for stuffed & baked pancetta & Parmesan mushrooms to allow our Victorian hero to shine!

And the mushrooms sure did shine.

The mushrooms’ velvety & meaty albeit vegetarian flesh were contrasted by a nice little char particularly around the lip of the mushies.

There was sweetness in smell & flavour from the sautéed onion & a gorgeous nuttiness from the garlic – both balancing the saltiness of the pancetta & the Parmesan.

I confess that I love seasoning with salt, but with this dish I was unusually very light handed on the salt as there was plenty of natural salt coming from the “two P’s”.

And as the flavours combine into a rather rich dish, freshness from the parsley was absolutely needed to keep it all singing in harmony.

On the matter of harmony, we went for a squeeze of lemon after taking the mushrooms out of the oven, which also worked brilliantly on the palette against the natural oil from the pancetta.

I have previously made this dish with lemon zest through the mix, which also gives it another lift.

Why didn’t I do it here?

But you could easily add some zest if you like citrus.

When it comes to selecting mushrooms, we went for a smaller (Swiss brown) cup as we ate it as a side dish.

You could just as easily go for a larger Swiss Flat, which is our preference when we are eating this as a main.

Two Swiss flats with a lovely green salad of rocket should hit the spot.

And maybe a glass of Pinot Grigio seeing as we are going Italian with all the rest.

In a pan, heat 2 tablespoons olive oil & sauté the onion on medium-high heat until onions are just translucent. Add garlic & once you smell the garlic, around 1 minute, add the mushroom stems & sauté for another 5 minutes. Season with pepper. Remove from the heat and put the mixture into a bowl to cool.

Once the mixture has cooled slightly in the bowl add the parsley, pancetta, breadcrumbs & Parmesan. Mix well so that all the ingredients combine nicely. Season with just a touch of salt and some cracked pepper (the cheese & pancetta will give it extra saltiness).

Fill the mushroom cups with the mixture using a small spoon. Drizzle with some olive oil and bake in the oven for around 15 minutes.

Serve garnished with parsley and a little drizzle of olive oil.