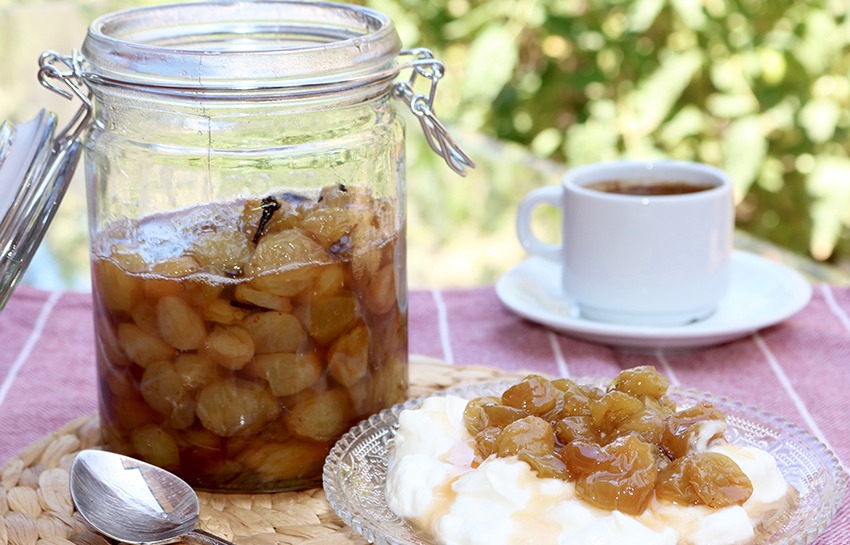 One of the best parts about eating out in Greece,

Is the complimentary dessert.

Not because it’s free…

But because it’s always a surprise…

Each Greek village, island and city…

Will have it’s own version of “kerasma”…

Greek for “our shout”,

Not quite, but that’s the jist of what kerasme means.

In many parts of Greece,

Literally sweet of the spoon.

Made from whatever the local…

And sometimes veg is at the time!

I’ve had all sorts of versions…

That have used orange, quince, watermelon and even walnuts as the hero!

The dessert gets its name from the fact that it’s usually served,

On a small dessert plate,

With a glass of water…

And a little spoon.

Sweet of the “spoon”.

Making this the Greek version of tea and scones!

In certain parts of Greece,

To balance out the sweetness of the almost jam…

And to showcase the local produce…

It is served on top of Greek Yoghurt.

The more rustic the setting,

The more likely that the yoghurt is made,

With milk sourced from the tavern owners’ own sheep &/or goats.

No such luck with our version…

But the Greek yoghurt we used was a delicious,

The choice of fruit was seedless green grapes.

They are abundant, cheap and delicious right now…

So we thought lets stick to the original philosophy of turning hay into gold.

It’s simple, not too sweet…

And so delicious that everyone will be asking for more.

Serve it up as is with coffee or tea…

As a dessert on top of yoghurt…

Or on your morning toast or muffins for brekkie.

That’s all from me.

In a medium size pot, add the washed grapes, sugar, water cloves and cinnamon and bring to a light boil on medium-high heat, stirring occasionally.

Add the lemon juice and keep lightly boiling for 10 more minutes, then remove from the heat.

Sterilise a jar and fill it with the almost grape jam.

Serve on top of Greek Yogurt once cooled, with bread or on its own, always with a glass of water, and preferably with a coffee!