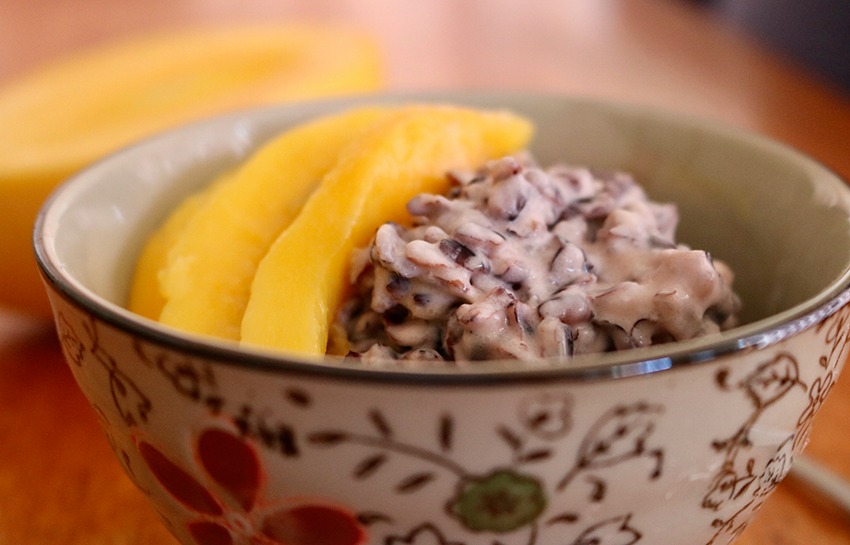 My dad can get a little funny when it comes to change!

And he’d be the first to admit it!

He likes things to stay as they are…

Don’t get me wrong,

He’ll experiment a little from time to time…

But there’s some things that he’s just stubborn on.

Bread at the dinner table, for example.

He won’t eat dinner without it!

And he’s not into fancy smanshy bread…

Into a white dinner roll from time to time,

But no multi grain or rye!

He’s also stubborn when it comes to veggies.

Stubborn I the sense that he won’t eat them!

“I’ll be right son, no need for any veggies on my plate today”!

But there’s no chance.

When it came to dessert today,

I was thinking it would be a straight out NO from the old man.

Made with full cream milk, sugar and WHITE rice.

When he got a whiff of rice pudding today…

But that saliva quickly turned dry…

When I told him it was black rice pudding!

And the old man gave it a go!

Maybe not loved it,

But he definitely enjoyed it enough to go for a second serve.

Is more textural than traditional pudding…

With the black rice having a lovely bounce on the bite.

Served on top as is,

Gives lovely freshness, colour and contrast to the pudding.

You could easily top with some caramelised coconut flakes,

Black sesame seed would look and taste goods too!

The black rice and coconut mango pudding is simple and delicious…

And a very appropriate dessert for the summery days.

In a jug combine 1 cup of coconut milk, cornflour, sugar and the cinnamon stick and stir to combine well, then set aside.

In a medium size pot, combine the water, rice and a pinch of salt and cook over high heat until the water is absorbed.

Add in the remainder of the coconut milk and the coconut cream and bring to the boil, then reduce to a simmer for 30 minutes, stirring occasionally.

Increase heat to medium-high for 3 minutes, stirring every minute for a bit.

Add the jug that was set aside earlier and once it has come to the boil again, in about 2-3 minutes, turn the heat to medium-high and cook for a further 5 minutes to thicken up some more. Turn off the heat and leave it to cool a little and set.