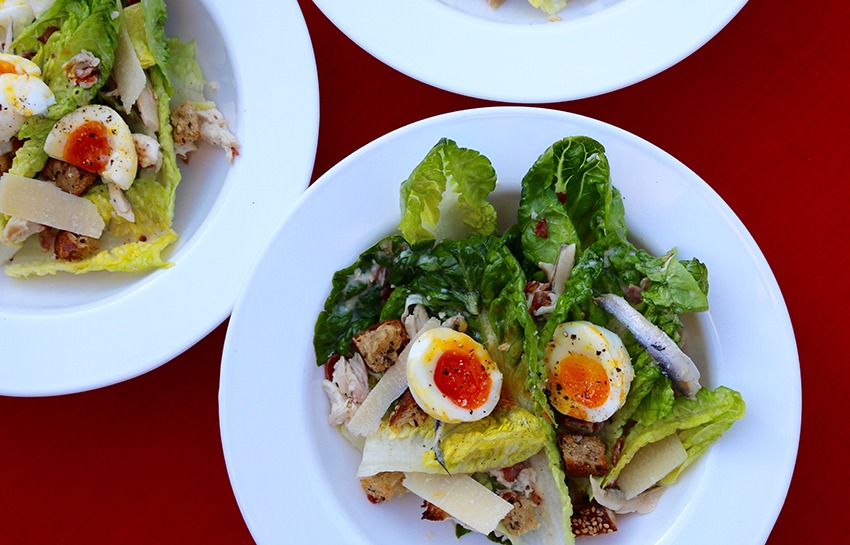 Forever and a day…

I assumed that the Caesar Salad took its name,

From the Roman Emperor, Caesar.

It appears that I was wrong.

It allegedly wasn’t even created in Italy!

Along with supplying frustrated Americans with alcohol…

It was the time of prohibition…

He also served them up,

What is arguably Americas’ greatest contribution…

To the culinary world!

The anchovies were an addition made by his brother, Alex…

A couple of years after Caesar put together the original!

They must have been wild times back then, in the roaring 20’s in Tihuna.

And shards of parmesan, for bite & sharpness.

To make sure it feeds a dinner party of four!

And super quick for those hot summer days,

When you don’t want to spend too much time in the kitchen!

The only thing left to say is…

Ingredients for the Salad

Ingredients for the Dressing

Method for the Dressing

In a bowl whisk together the garlic, anchovies, mustard, Worcestershire sauce, lemon and the parmesan.

Add the mayonnaise and oil, whisk until well combined and a nice consistency. Season with salt & pepper to taste. Set aside.

Method for the Salad

In a pan, fry the bacon until crispy then set aside.

In a large bowl, add the cos, chicken, bacon and croutons and toss to evenly mix.

Add half the dressing and lightly toss to coat all the lettuce leaves. You can add more dressing depending on your taste.

Divide into 4 bowls. Add one egg cut in two into each serve. Add 2 anchovy fillets per serve.

Garnish with shredded parmesan and serve. Put the remaining dressing in a bowl for whoever might like extra on their salad.